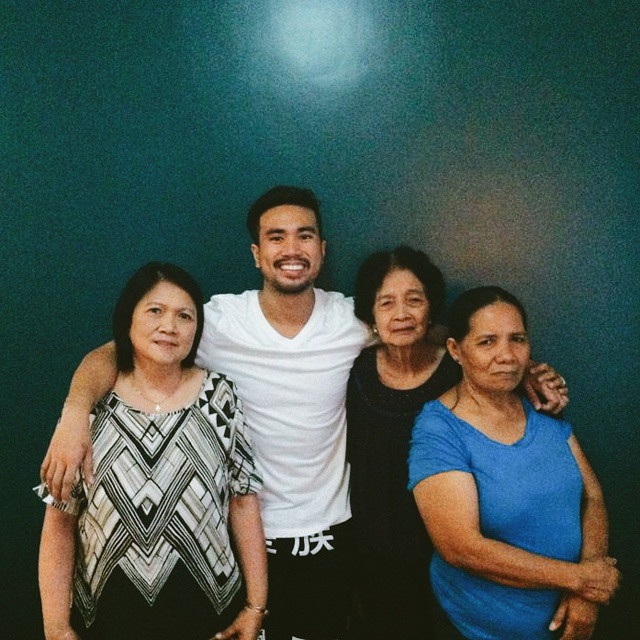 With my mom, my grandma, and Ate Belle, taken two months ago during their birthday month, January.

My mom and I argue over a lot of things. From the small (like the way I enjoy the creative disorder in my place which she sees as a direct assault to the organized laws of the universe) to the big (like my vegetarianism, and my departure from the faith they have raised me in), we tend to clash over matters that oftentimes frustrate the two of us, as we attempt to decipher the inner workings of each other’s minds.

The thing about my mom is that she can be very stubborn. She, after all, received the brunt of my grandfather’s military-style parenting, as one first three children in a brood of ten. A lot of my lolo’s sternness had definitely rubbed off on her.

Growing up, my older brother and I were forced to listen how my grandfather would pull the pillows from under my mom and my aunts’ heads once the sun had risen, and make them go to the town spring kilometers away from their house so they can wash their clothes, if only to teach me and my brother to value the many comforts they didn’t enjoy back then (washing machines! Water service providers! And also, being allowed to sleep in.)

She also taught us to be grateful for our education, as she almost didn’t get to study college. My mom would always tell us that she wasn’t the brightest among her siblings (she was more street-smart and had hustled her way through life), and my grandfather thought it was a waste to spend so much for her. Had my grandmother not put her foot down and said that all her daughters will get the education she did not get (even if she had to sell her inheritance to make that happen), my mom would have probably been married off to someone from our province, Masbate.

It goes without saying that I was surrounded by many strong female influences. While my mom worked most of my childhood, she left me and my brothers under the care of Ate Belle, a single mom who was abandoned by her husband and hence had to forgo being close to her own kids because she needed to work for them. Trust me when I say that dealing with me and my brothers on top of doing the household chores every day, for more than two decades, was no easy feat–something which demanded a certain strength in spirit that deserved sainthood (and/or all the coconuts she can carry.)

My paternal and maternal grandmothers, on the other hand, not only survived World War II – they had to raise large families as well and defied a lot of traditional gender roles when they could, despite how they were constantly pummeled into submission by a system which hugely favors cisgendered men.

Life was definitely not a walk in the park for them, and that was one thing which they drilled in my head: that life will never be easy. Granted that life messes everyone up in one or another, but I think one thing that I appreciate is that, despite the flaws and misgivings, I learned from them that gentleness is not necessarily weakness, and a lot of the things we celebrate as strength is merely aggression. Most of all, I always try to remind myself their lesson that you needed to fight back to survive, but you should never let that harden you, puff you up, or make it easier for your conscience to step on other people.

I do not have to be a woman to understand the oppression women have to go through. And I do not mean to say that we should only concern ourselves with feminism because we have mothers or sisters or daughters. I do not need my mom and my grandmothers and Ate Belle’s stories to recognize the need for equality, but I admit that their stories color my views on how the world can be better for women.

I dream of a world where women like my mom will no longer have to worry about not getting education because they’re women (even when dumb men get to go to school just because they’re boys), or when mothers like Ate Belle are forced to abandon their families because their ex-husbands are not vilified for being irresponsible, or when females cannot make a choice for their bodies because institutions tell them that their worth relies on their ability to reproduce.

Being gay, I get what it means to be marginalized/stereotyped. But I didn’t have to be born gay to know that we need to fight for equality.

I may not agree with my mother on a lot of things, just like how I may not agree with some women on many issues, but I know that I do not have to wholly agree with her or other women to empathize with her and their pains. Because if you don’t get why everyone should get a fair shot at life, then you seriously need a crash course on being human.

Because March 8 is International Women’s Day, and we still have a long way to go.

Evan Tan is a writer & communications professional based in Manila, Philippines. www.writerinmanila.com