Previously, I discussed my thoughts on power in a post years back. I mulled over this again while watching “Kung Paano Ako Naging Leading Lady”, currently being staged at Onstage in Greenbelt 1. 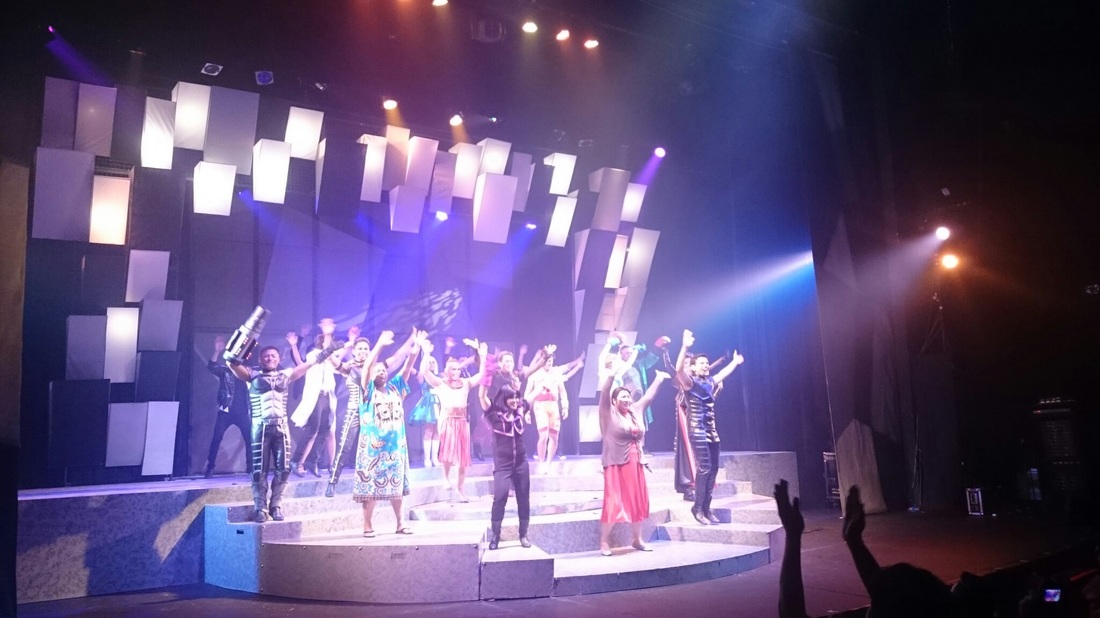 The story revolves around Fuerza Filipinas–a group of mestizo, English-speaking superheroes; and their clash with Kayumanggilas, a team of villains who aspire to overthrow the Fuerza.

With their lack of education, brown skin, and terrible English, the bad guys of the story grit their teeth for being unlike Fuerza Filipinas–scheming to finally overthrow the heroes thanks to a chemical that grants them superpowers.

Caught between the war of these two factions are Mely, Fuerza Filipinas’s househelp who, resigned to her belief that opportunities for her to succeed are slim, chooses to follow the rules and keep low to make her employers happy; and her younger sister Viva who, in her dream to have a better life, is duped into colluding with the enemies.

The brainchild behind the play, Carlo Vergara, was upfront that he loved making social commentaries in his materials. During the press Q&A after the three-hour production, he pointed out that he intentionally packed layers of meaning into the script.

One of those layers might very well be privilege going hand in hand with charity.

We are presented a group of superheroes who are so unlike the masses that they save every day from evil robots and other nefarious creatures. The leader of Kayumanggilas, Senyor Blangko, was quick to point out that these heroes do not represent the “barakong Pinoy”.

And we witness this in the society we live in: perhaps fueled by our subservient, xenocentric mentality, we judge people’s aptitudes by their skin color and ability to speak English, as if to perpetuate the belief of one’s innate savagery and the need for enlightened foreigners to save us. We look up to rich socialites being charitable, even if this, while noble, is actually a blatant display of their privilege.

To think about it, a lot of charitable acts are merely unabashed displays of privilege. It is someone reaching from above to those below: something that is, more often than not, a charade of empowerment. Once the cameras have gone and the charitable events have finished, the poor remain poor, and the rich remain secure in their little kingdoms, waiting for the next opportunity to let the masses have their cake.

Of course we can say that it is better to have charity, however hypocritical, than to live in a society that doesn’t care at all. Perhaps it is true. I would rather have a world where the elite use charity to curtail dissent and agitation than brute force and violence.

But it does make you think whether these acts of charity are intended to keep the masses docile and subservient. It does make you wonder until when we would be willing to accept these tools of control.

On the other hand, are the alternatives any better? In the play, the Kayumanggilas attempts to sequester power from Fuerza Filipinas under the banner of pride and nationalism. The story reveals that while they themselves are victims of oppression, they also do not have the best interests of their fellowmen at heart.

Even the ultimate hero, Viva, isn’t exactly the smartest person among all of them–and while she might be powerful at the end of the play, we somehow think that she will commit the mistake of being duped again by people craftier than her.

After the gloss and glitter of the singing and dancing, we, the viewers, are slowly made to realize that the play does not present the best option at all. Each choice it hands us is fraught with its own frailties and failures.

Maybe that’s the thing the play wants us to take away: there is no true hero and everything is just one big show. We’re left to just hope that, at least, we get to witness a very good one.